I gladly arranged an interview with Yun Yeongseon 8p for our anniversary of 25,000 views! We met last weekend this is it! 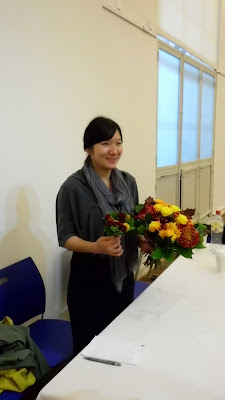 1.    How were you introduced to Baduk?
My father taught me Baduk. He was 2 Kyu. I learnt Baduk for better concentration.
2.   How was your time as a yeonggusaeng? It was a hard time to keep up, wasn’t it?
I was yeonggusaeng for just six month. When I was 11 or 12 years old. The Hanguk Kiwon was far away for me and my brother back then. When I began my strength was 13. Kyu (side note: there was a ranking for yeongguaeng, 2-3 Kyu were pro-level – you got pro). Everyone who got promotion to pro in the time isn’t top anymore today.
3.   The handicap stone difference was higher than today. Today the new professionals can play even games with 9 dan pro. Where is the different between today and back then?
The yeonggusaeng played with just 0.5 handicap stones and not everyone was promoted to pro. The classes of the yeonggusaeng were smaller and there were less schools than today are.
4.   In the last few weeks the ama-players were strong and successful in national and international tournaments. Are you surprised to see amateurs in the mainround of the Myeongin (Korean title)? At the moment one of them got pro promontion.
Cho Inseon ist pro now too. In the new system amateurs can get pro with a certain amount of points. You need at least 100 pts. ( explanation for the new system )
They train for more than 10 hours a day for becoming pro.
5.   How was the old and how is the new rating-system?
The old rating-system was like the Japanese one (ooteai). In the new one you need a lot wins in the first rounds of all tournaments. For a win you get 90 pts for a loss 30 pts. Every point will be add and at a certain amount of points your rank will rise.
6.   You are quite famous in Korea. Does this mean something to you?
First of all I am not famous. I was top female player back then but not famous. When I was pro there were maybe seven other players. Today there are more than 40 players. I won lot of titles and therefore I got some fame maybe. Just older people know me^^.
7.   You won a lot titles in your active carreer. Which of them is the important for you?
The Kuksu title. I won it few times and this title and the IBS Cup were the only ones at that time. The IBS Cup was a lightning tournament and there was just one edition of it. I won it J. Some international titles were there too.
8.   You studied at Myeongji University. Why did you decide you study there?
I wanted to get to know the university life and to get know other things beside Baduk. After the study I was world champion. The study helped me and I got more used to it in the practice. My overview of the board were a lot better. The study fee was free for professionals back then. But today it isn’t due to them you didn’t continue the study to the end. Just three or four pros pass the study. Besides the university I played some tournaments not all.
9.   What do you recommend your readers to do for Baduk?
I think it is important to play as much as you can and to have a rival. That worked pretty well for me too. The rival motivates you to get stronger and that let you improve faster.
What ist he best Baduk school in Korea?
My old school of course :). But today it isn’t so popular like in my time. There are a lot new schools in Korea now. Like Yang Jaeho 9p, Yu Changhyeok 9p and other players connected there school, because they know each other quite well.
11  What do the European players miss compared with Asian players?
Well, in Asia are lot of strong players in the same city and region. It’s lot easier for them to play each other. Another reason is that they have more experience in games especially ion fighting. And they play a lot lighting games like 10sec.  In Europe the top players are widespread in various cities.
12  What’s the biggest mistake to do in Baduk?
My pupils doing easy mistakes in the end due to missing concentration. They played well but lost by some mistakes.
Thanks for the interview :)
-a1r-
Written by a1r um 11:49 AM

Yes, Yeonggusaeng is Insei in Korean and I don't think she became pro in just 6 month. ^^