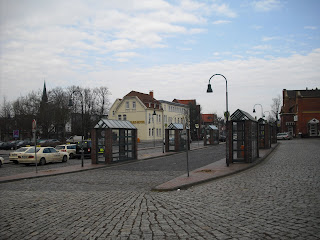 The picture above is the place in front of my hometown's train station. Here my 6 month long journey began. Anxious of what to come I boarded a train to Frankfurt where I would take a plane to bring me to Korea. My old 2dan rated mind was jumping in circles.

The flight was a standard economy class ticket in a big Lufthansa jet. A flight of 11 hours cramped next to another friendly German I was staring out of the window onto the wing of the plane. So far for my nice window seat with a great view...

A bit nervous I was walking down the tediously long halls until I finally arrived the counters to really enter South Korea for the first time!

Outside on the Korean side Hong Seul-ki 7dan was waiting for me and soon I was greeted quite a large group of soon to be students of KBC, the Kingsfield Educational Center. The photo below shows the mini bus our teachers had rented to pick us all up at the airport. As I was last to arrive at Incheon airport I did not even spent ten minutes after exiting the gate. Thus my adventures in Kimchi-land began. 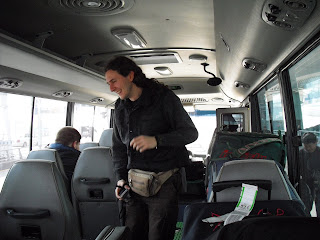 this guy is Dal Zovoooooooo!!!